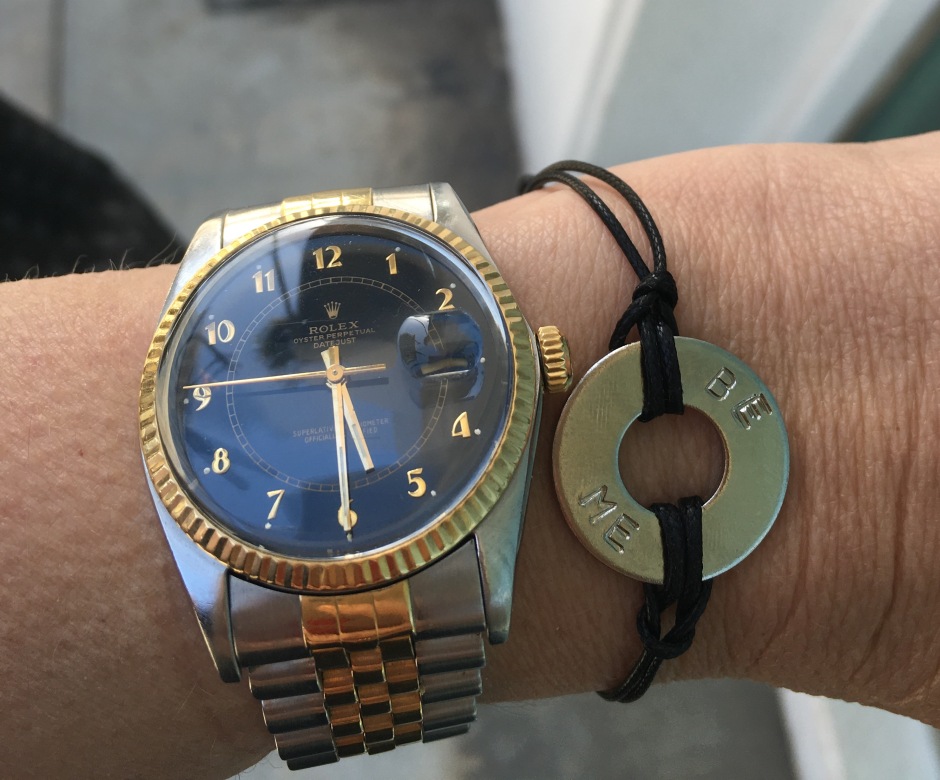 My father-in-law passed away five years ago.  I did not have the chance to get to know him that well.  We were thrilled that he attended our wedding reception in California.  He lived in the West Village in New York City a few blocks from where I had lived when I lived in New York City.  He lived a a full life that included being a published author, professor and partner in a law firm.  My husband was given his watch.   His father loved the watch and likely had not taken it off very much since the eighties.  My husband immediately took it and had it serviced and refurbished.  His plan was to enjoy it and pass it on to our son, who is currently in Kindergarten.  My husband is a watch lover and has a couple of others, so he wore it for a while and then placed in our safe deposit box for safekeeping when we were moving.

I had another watch that was an anniversary gift that always ran fast.  I had it looked at couple of times and serviced.  Recently, I took it in for service again. There was a theory that self winding watches would just run fast on me.  I did not think so.  I figured that would also mean a fast metabolism, which sadly, is not something that I have.  I asked my husband if I could wear his father’s watch in the meantime.  It seemed a shame for it to just sit in a safe deposit box.  So I went to pick it up after it had been in the safe deposit box for almost two years.  When I took it out of the safe deposit box,  it was running and on the right time.  I found that odd.  A few weeks later, I had the flu and did not wear it for a few days and, of course,  like a self winding watch, it stopped.  Since I have been wearing the watch (which keeps time perfectly, by they way), I have started this blog.  I have said that I wanted to write for a long time.  Wearing the watch coincides with a burst of creativity for me.

We all have these talismans – some are very conscious and this one was not at first.  It has a navy face!  My father-in-law and I also share the same sun sign, Gemini.  We both loved New York City.  I only lived there a short time, but would definitely live there again.   Somehow I think the watch was waiting for me in the safe deposit box.  I doubt it was running the whole time, but it was on time and ready for me to begin this adventure.  It holds a lot of power and encouragement for me now.  I am the custodian for my son and I plan to take really good care of it.  In the meantime, when I am having writer’s block, I look at my wrist and keep on going, as I imagine my father-in-law did many times.

7 thoughts on “The Watch”